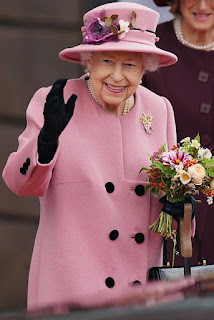 Our thoughts and prayers are with the Royal family and the people of the U.K. during this difficult period. May God comfort and give them peace, as they mourn Her Majesty. May her soul rest in peace.

Here is some reaction to the news:

"As the United Kingdom's longest-lived and longest-reigning Head of State, Queen Elizabeth II was widely admired for her grace, dignity, and dedication around the world. She was a reassuring presence throughout decades of sweeping change, including the decolonization of Africa and Asia and the evolution of the Commonwealth."

"In a world of constant change, she was a steadying presence and a source of comfort and pride for generations of Britons, including many who have never known their country without her," they said in a statement. "Her legacy will loom large in the pages of British history, and in the story of our world."

In a message to Charles, Britain's new king, Putin said the queen "rightfully enjoyed the love and respect of her subjects, as well as authority on the world stage", adding:

"I wish you courage and resilience in the face of this difficult, irreparable loss. May I ask you to pass on sincere condolences and support to members of the royal family and the entire people of Great Britain."