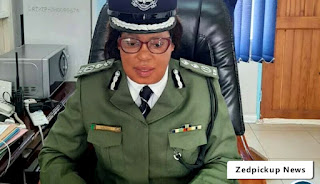 Father Deodatus Mbebe 50, of Saint Joseph Mission in Kalulushi District was found in a pool of blood with multiple head injuries and a broken right arm.

Copperbelt Acting Police Commanding Officer Sharon Zulu said Father Mbebe’s body was found in Pamodzi Township in Ndola with a concrete block next to his side.
Ms Zulu said the body was found on Saturday around 21:30 hours by members of the public who declined to disclose their particulars.

She said Father Mbebe was only identified yesterday by Father Felena Lambe ,Major Superior for the Franciscan of Malawi and Zambia.

Ms. Zulu said the body was found 50 meters away from Justina Luchele’s home and two of his phones, a Catholic robe, shoes and two wrist watches were found in her home.
She said investigations further revealed that the lady is a nurse at Arthur Davison Children’s Hospital and the two have been in a relationship since 2002.

Ms. Zulu said the lady explained that the deceased left her place around 16:00 hours while driving her vehicle going to Ndola bowling club and never returned.

On Sunday at 07: 00 hours Muleba Simon, Fibobe ward councilor who happens to be a childhood friend to Father Mbebe received a phone call from Ms Justina Luchele inquiring about the whereabouts of the boyfriend.

The funeral gathering is at Franciscan Centre in Ndola and burial is set for this Wednesday at St. Theresa Mission in Ibenga, Mpongwe.